The Change Series by Rachel Manija Brown and Sherwood Smith 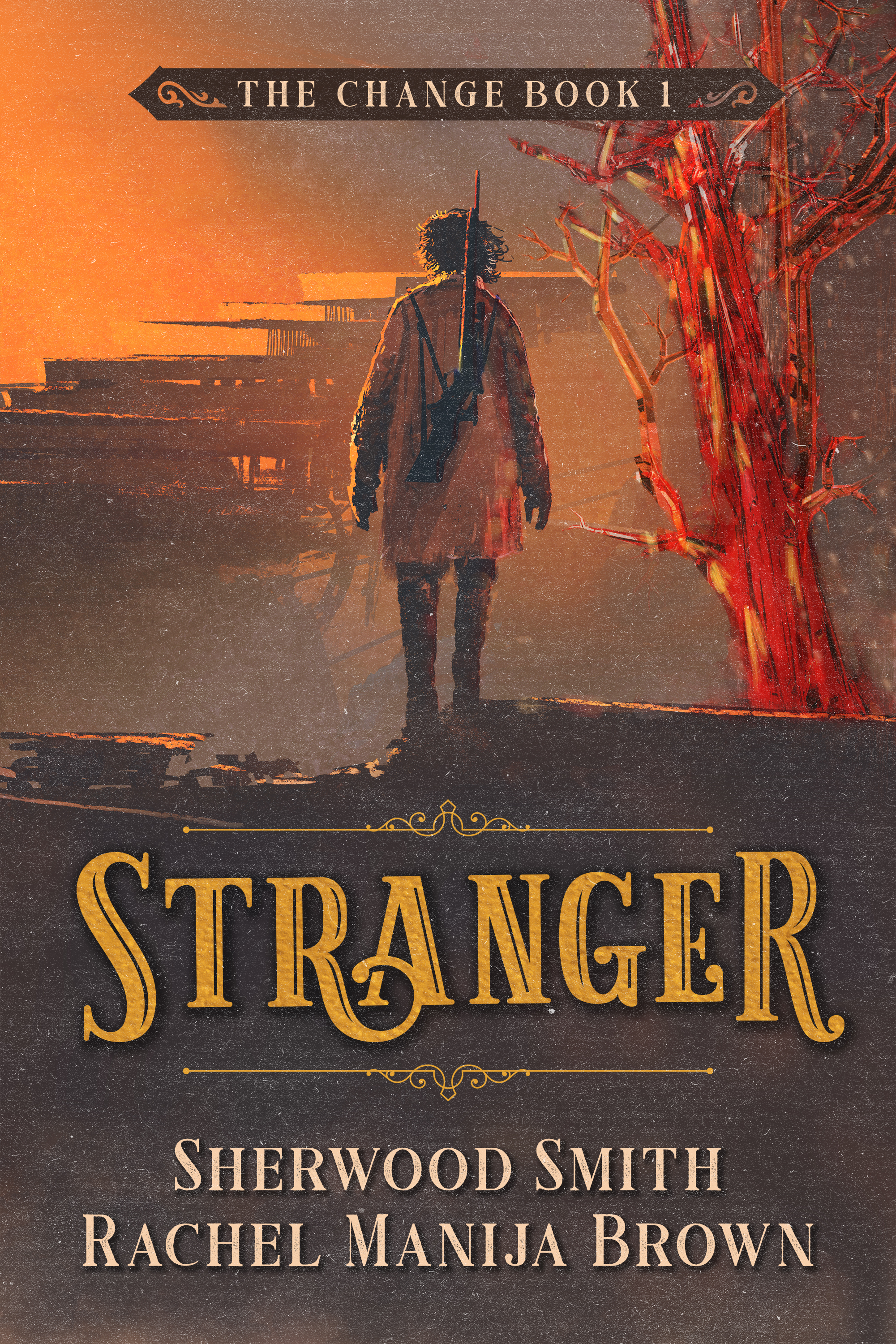 Welcome to the post-apocalyptic frontier town of Las Anclas, where the sheriff possesses superhuman strength, the doctor can warp time to heal his patients, and the distant ruins bristle with deadly crystal trees. In the deserts outside of town, teenage prospector Ross Juarez’s best find ever – an ancient book he doesn’t know how to read – nearly costs him his life when a bounty hunter is set on him to kill him and steal the book. Ross barely makes it to Las Anclas, bringing with him a precious artifact, a power no one has ever had before, and a whole lot of trouble.

On the final list for the YASLA Best Fiction for Young Adults 2014, named on the Rainbow List for 2016, and also nominated for the Young Hoosier List. 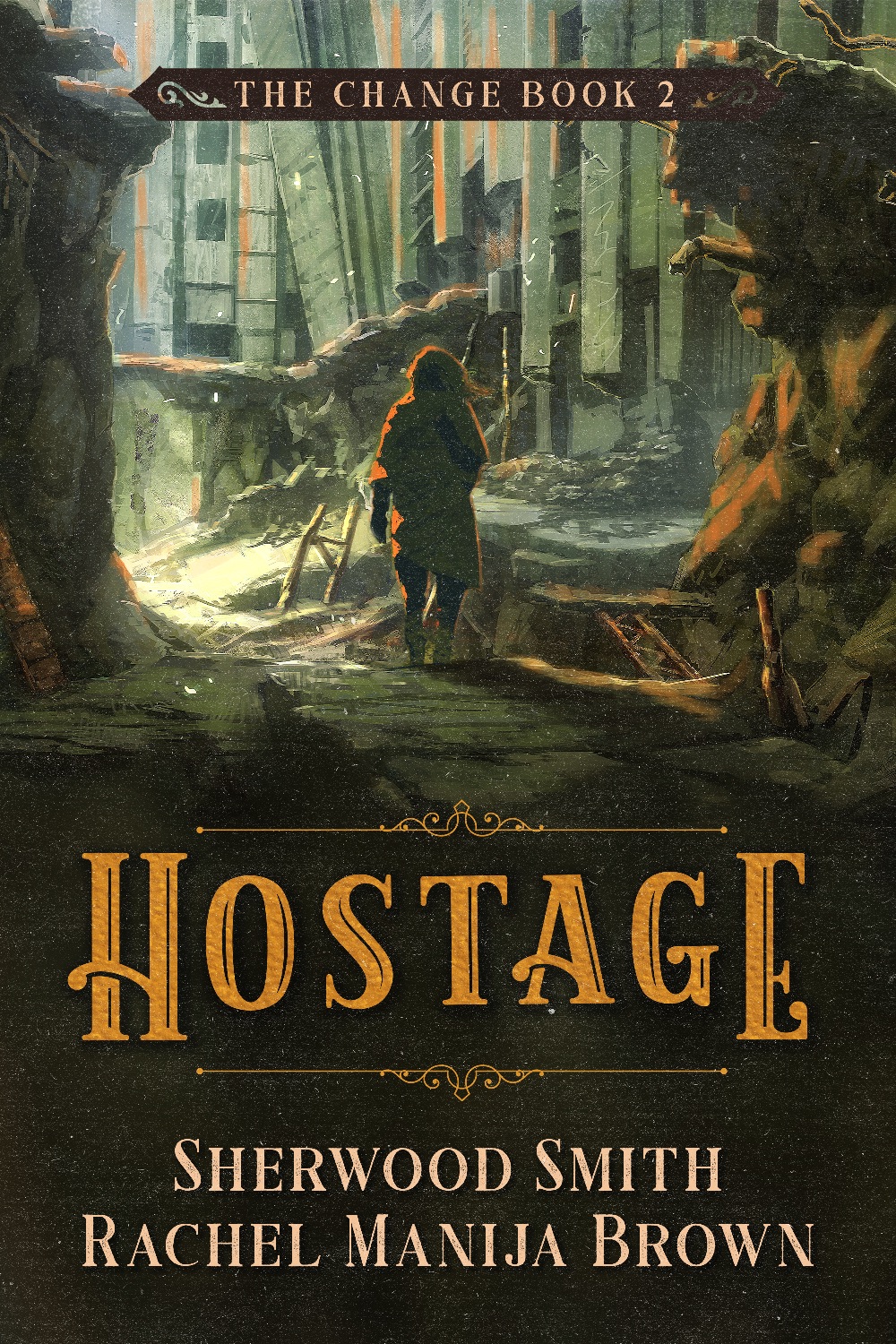 Welcome back to Las Anclas, a frontier town in the post-apocalyptic Wild West. In Las Anclas, the skull-faced sheriff possesses superhuman strength, the doctor can speed up time, and the squirrels can teleport sandwiches out of your hands.

In book one, Stranger, teenage prospector Ross Juarez stumbled into town half-dead, bringing with him a precious artifact, a power no one has ever had before, and a whole lot of trouble— including an invasion by Voske, the king of Gold Point. The town defeated Voske’s army, with the deciding blow struck by Ross, but at a great cost.

In Hostage, a team sent by King Voske captures Ross and takes him to Gold Point. There he meets Kerry, Voske’s teenage daughter, who has been trained to be as ruthless as her father. While his friends in Las Anclas desperately try to rescue him, Ross is forced to engage in a battle of wills with the king himself. Meanwhile, Las Anclas gets its own hostage . . . 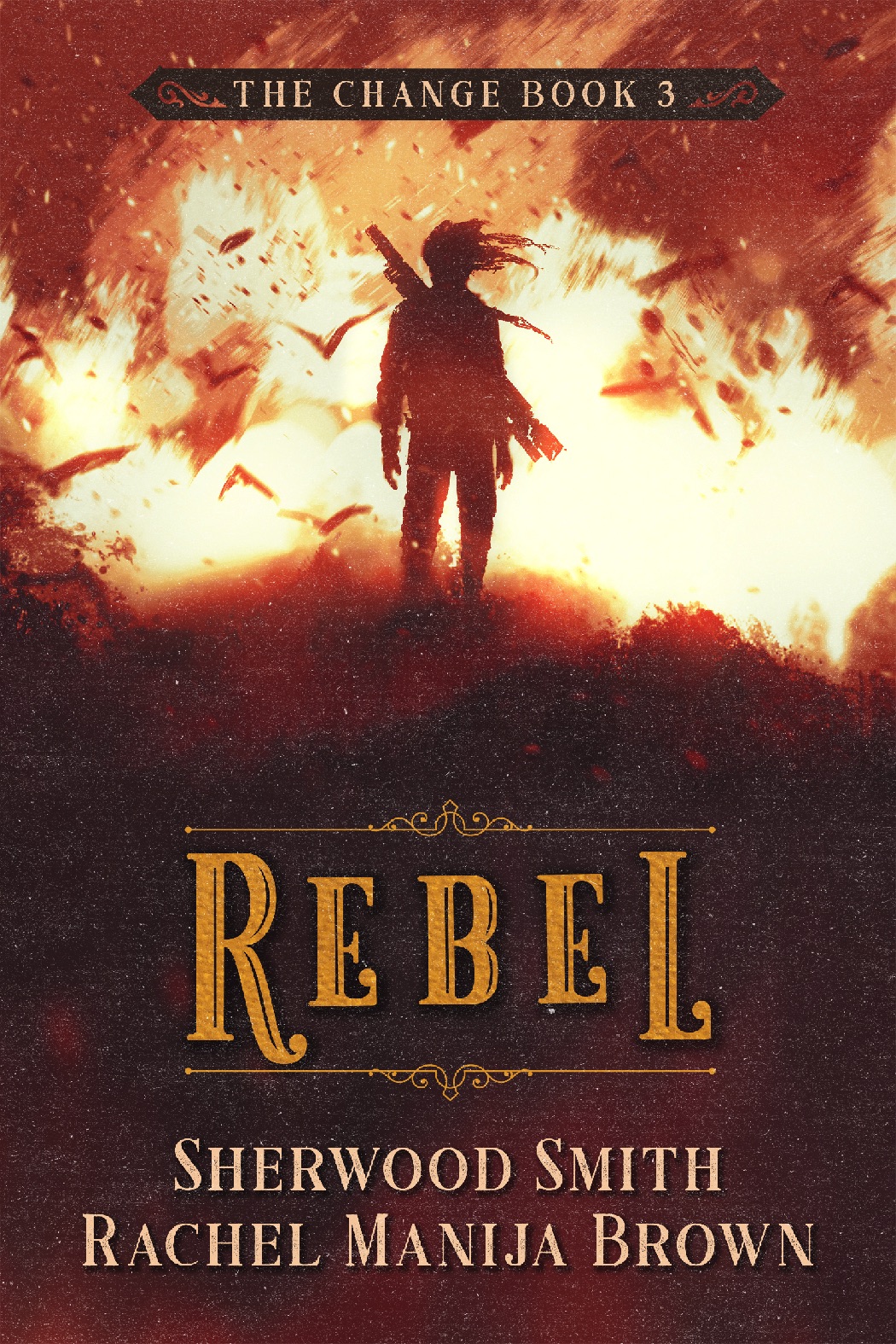 Welcome back to Las Anclas, a frontier town in the post-apocalyptic Wild West. In this perilous landscape, a schoolboy can create earthquakes, poisonous cloud vipers flock in the desert skies, and the beaches are stalked by giant mind-controlling lobsters.

The tyrant king Voske has been defeated, but all is not peaceful in Las Anclas. Ross’s past comes back to haunt him, Jennie struggles with her new career, Mia faces her fears, Felicite resorts to desperate measures to keep her secrets, Kerry wonders if Las Anclas has really seen the last of her father, and shy Becky Callahan may hold the key to a dangerous mystery.

In Rebel, long-held secrets of past and present are revealed, family ties can strangle as well as sustain, and the greatest peril threatening Las Anclas comes from inside its walls. 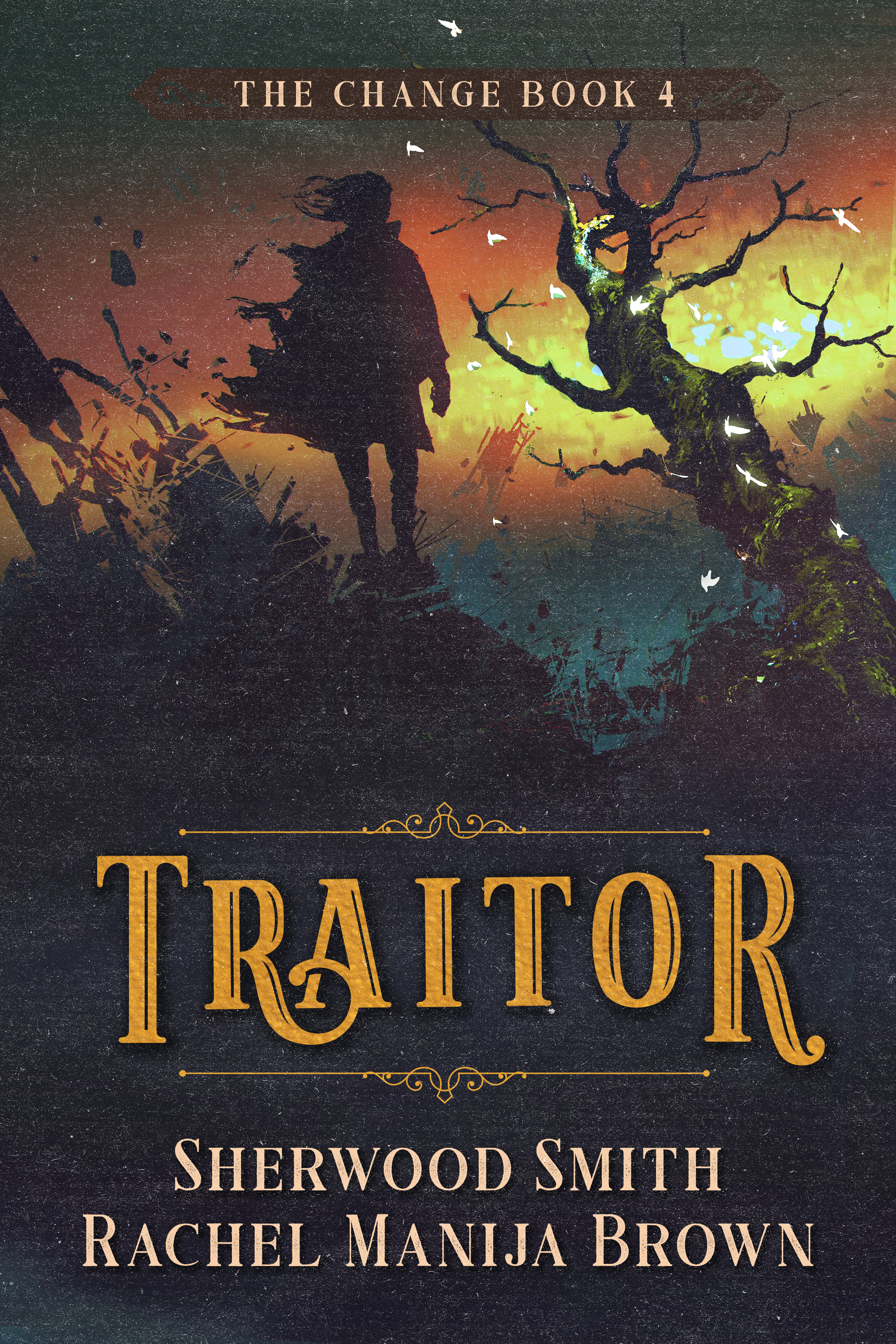 In Traitor, Voske comes back.

All of Felicite’s secrets come crashing down around her; a resistance is formed by those least expected; Ross, Jennie, Mia, and former princess Kerry are forced into the position of heroes once again, always with commensurate cost.

And Paco is forced to face the father he denied.

Yes, it’s another post-apocalyptic series opener, but it’s infused with a generous spirit–call it a utopian dystopia.

The small, walled community of Las Anclas bears little resemblance to Los Angeles, whose ancient ruins sprawl nearby. To Ross, a badly wounded prospector fleeing a powerful enemy, it’s paradise compared to what he’s used to–to its residents, not so much. Yuki misses the freedom of the wild ocean and dreams of escaping with Paco. Engineer Mia loves blowing things up, but she feels socially awkward. Felicite, the daughter of the mayor and defense chief, knows precisely what she wants: to make half of a power couple with Indra, Jennie’s boyfriend. Jennie herself is delighted to be chosen as a Ranger, the town’s elite defense corps; she’d feared that prejudice against the Changed, people like her who’ve acquired strange powers, made her a long shot. Mia and Jennie, best friends, find themselves attracted to secretive Ross. Characterization is rich and stereotype-free. For gays and lesbians, sexual orientation is neither more nor less a defining characteristic than it is for heterosexuals. Equally exceptional is the depiction of conflict. The confusing adrenaline rush of war is followed by PTSD, its lingering afterimage. The five dynamic narrators and action-packed plot deliver thrills while slyly undermining genre cliches.

A first-rate page turner that leaves its own compelling afterimage.

Running from a bounty hunter, 18-year-old Ross Juarez seeks healing from his injuries and temporary asylum when he arrives in Las Anclas (known as Los Angeles before the worldwide disaster that, generations ago, caused mutations among some people and animals). With Dr. Lee and his daughter, Mia, the young prospector also gets a sense of home. Ross slowly makes both friends and enemies, but he isn’t safe, and neither are the people of Las Anclas when the king attacks the city, trying to capture both Ross and the rare book in his possession. Brown and Smith have collaborated beautifully in creating an alternative future planet, with strange creatures, changed people, and many dangers. What makes this book different from so many dystopian novels is the depth of character development (including both straight and gay romances), chapter points of view that rotate through five different characters, and the ease with which readers will be completely immersed in this world. Perfect for fans of Michael Grant’s GONE series. Expect more.

Stranger goes on sale November 13. To receive news about its release, and further news about the series, sign up here!

Here is a PDF showing the layout of Las Anclas. This quick sketch shows Las Anclas’s place on what had been the California coast. (For those who know the area, the town is built on what had been Loyola Marymount. Some of the artifact books they treasure are remnants of the university library.)

Gold Point lies over what was once Hemet, before a great deal of tectonic activity. Las Anclas is 106 miles to the west over extremely rough terrain, and Lake Perris is 22 miles to the north.